LG Grace LTE L59BL, a big smartphone that enters the TracFone’s line up is available on the market with plenty of surprises in there including the latest Android Nougat OS and of course it’s big screen.

Looking for a big smartphone with the latest Android OS? LG Grace LTE L59BL is the answer. Comes with 5.3 inches display screen and using Android 7.0 Nougat OS, this phone indeed has so many potentials. But is it really worth to have one? Keep reading. 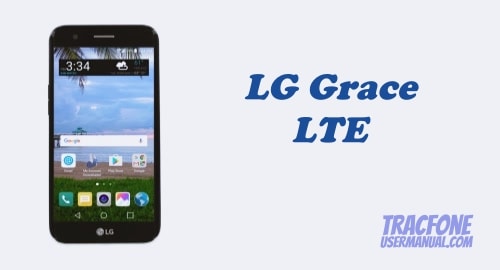 Start with the way it looks. It comes with Bar form factor and measured at 5.85″ x 2.96″ x 0.315″ and weighted at 4.94 ounces. For a smartphone with a much bigger size than average, the size, especially the weight is not too much different from the smaller one. It means the user can comfortably hold it without being weighted down.

Big screen size, that is the first thing that comes to mind, what with its 5.3 inches TFT LCD screen. Bigger than the average 5 inches screen. The screen boasts 1280 x 720 pixels resolution or simply said HD resolution. It gives a clear and crisp picture, but it will work even better if it’s using full HD resolution. But so far, everything looks good on it.

To add more strength and in the same time more looks on the phone appearance, LG uses 2.5D Arc Glass on both sides. It is a simple yet nice touch for the whole part. One more additional feature of this phone is the customizable home touch buttons, which is a nice touch to have.

LG used the latest Android 7.0 Nougat OS for this smartphone. Currently, this is the newest version of Android available and there is already some talk about the next version, which means that LG Grace LTE is still keeping up with the trend.

Just like with other LG’s smartphone, LG Grace was also built with its personal user interface. In this case, LG equipped it with LG UX 5.0. A simple swap is all it takes to bring the user to explore the entire apps in here.

Want to record a video with it? No need to worry, the user can use the 1920 x 108o pixels video recording abilities of this phone to record video at 30 fps.

The phone is running with Qualcomm Snapdragon MSM8917 1.4 GHz Quad Core processor. The 1.5 GB RAM gives more room for more application. For the internal storage, the phone comes up 8 GB internal memory but only 3.7 GB that is usable. No need to worry though, because it can be expanded using microSD card that can store more data, more file, picture, and video for up to 32 GB.

Does LG Grace support 4G LTE? Of course, it does. Most smartphone this day already support 4G LTE connection to give user maximum experience when browsing on the internet.

For this smartphone, LG uses a 2800 mAh removable lithium ion battery. The fact that the battery is removable is surprising enough since most smartphone chooses to have a non-removable battery. The battery capacity also big enough to keep people talking for 14 hours and in standby time, it can stand for up to 10 days.

Everything about this big size smartphone sounds good enough. Anyone who is looking to upgrade their phone to an even bigger one compares to the one they use currently and still want to hook up with TracFone could take LG Grace into consideration.