Full introduction of TracFone Majesty Pro Z798BL / Z799VL, one of the latest smartphone comes into TracFone line of service, and get to know this two pair of smartphone together.

Released in 2017, ZTE Majesty Pro is available in two versions, the CDMA, and GSM version. Using Android Marshmallow OS, this phone offers the best of its OS at its time combine with other features already available in there. 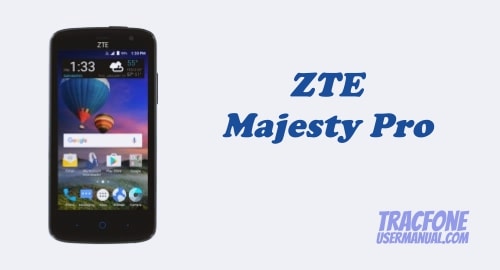 Bar form factor of this phone comes as no surprise. After all, this is the most common design that most smartphone use because it is practical, functional and easy to handle at the same time.

It seems like ZTE choose to produce a small to mid size smartphone with this one. While other manufacturer goes to a bigger screen, at least 5 inches display screen, ZTE Majesty Pro was built with 4.5 inches screen only. For people used to bigger screen, switching to this one seems like a downgrade.

The 480 x 854 pixels of resolution is a little below the average. Those who prefer super extra clear, crisp and detailed screen comes from HD or full HD screen will not enjoy this one. In the other hand, the phone uses a thin film transistor (TFT) LCD display. It also multi touch capable, so no worry here.

ZTE Majesty Pro using Android Marshmallow OS. Lately, Android has come with an even newer Android version, but still, this particular version works great and it was said that this version is able to help with battery efficiency. The Majesty Pro’s firmware can be upgraded to newer version of OS to help improve its performance. It also means that user doesn’t have to worry about being left out.

The user can also use it to record video at 1920 x 1080 pixels at 30 fps. Both camera and the video recording features work well enough for daily use.

The phone running using 1.1 GHz Qualcomm Quad Core MSM8909 and 1 GB RAM. While the RAM cannot be expanded, the internal memory (8 GB) can expand, using microSD card that can keep for up to 32 GB. No need to worry about running out of storage area here.

Speaking about the network, ZTE Majesty Pro supported not only 2G and 3G but 4G as well. It helps the user to have faster and smoother internet connection.

For other connectivity option, the user can use Wi-Fi, its Bluetooth version 4.2, a built in A-GPS receiver to determine the exact geographical location on earth, an FM radio receiver to keep the user entertained and much more.

A non-removable lithium ion 2100 mAh battery complete the final touch of ZTE Majesty Pro. The battery capabilities were supposed to be able to stay up for 12 hours of talk time and 11.5 days of standby time. That is a pretty decent standby and talk hour time, which will work okay for most people.

ZTE Majesty Pro indeed didn’t offer something very special. The entire feature it has to offer is pretty average. Other than the mentioned above features, this phone also has other features such as multimedia messaging and hearing aid compatible. But still, those are a common feature that most smartphone also has.

ZTE Majesty Pro offer okay performance at an affordable price. It will serve well for people who want to have their first smartphone and at the same time use TracFone service.