How to add data to Tracfone. Learn Tracfone Data Plans and find out is the Data Only Card worth it compared to other Tracfone airtime cards.

Nowadays, a phone is not only for just calling and texting. A phone is also a device for people to connect to the internet. Therefore, having data is almost a necessity for many people. For some, they can’t live without accessing social media every day.

Tracfone plans already comes with data on its airtime card. However, with heavy usage, it’s possible for you to run out of data so quickly before it’s time for you to renew the plan.

So, what should you do in this situation? Thankfully there’s a card where you can add more data to your existing balance. Here, we will explain how to add data to Tracfone with Data Only Card.

When you buy a Tracfone Smartphone Plans, you get three things: Amount of call, amount of text, and amount of data. These three are separate from each other. So, it’s possible to run out one while you still have a balance on the other services.

Data is something you can use to upload and download everything on the internet. On Tracfone plans, with data you can browse websites, checking social media, stream videos, and download files. Data is measured in bytes: MB (megabytes) or GB (gigabytes).

How to Add Data to Tracfone 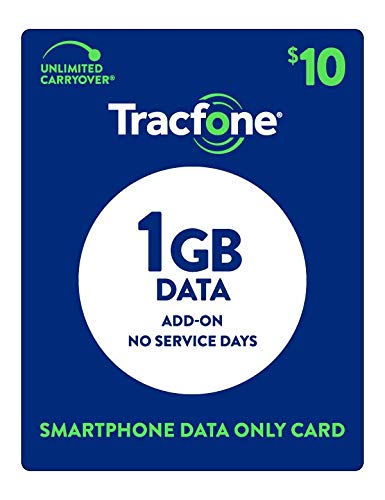 When you run out of data, you have two options: buying more Tracfone Airtime Card or buy Data Only Card.

Buying a new Smartphone Plan will get you not only data but also texts and call balance that come with it. It may be a good idea, especially if you also need to add your text/call balance. The regular smartphone plan is also useful to add more service days.

But if you still have a lot of calls or texts left, you will end up paying on something you don’t use. That’s why Tracfone also releases Data Only Card. If you specifically wants to add data to Tracfone, this card is what you’re looking for.

What is Tracfone Data Only Card?

Data Only Card is one of Tracfone add-ons. You can buy Tracfone Data Only Card for $10 and it adds 1GB of data to your phone. Looking at the amount you get and the price, it means you pay 10 cent per 1MB.

There are several things to note about TracFone Data Only Card. First, they don’t add more service days. Second, they are available for smartphone only.

When deciding, which one is better money-wise, the Data Only Card or Airtime Card? Let’s make a comparison with some of Tracfone smartphone plans on the same price range.

As a verdict, the Data Only Card is the ultimate winner as long as you don’t need text and call minutes.

Data Only Card for Users with an Unlimited Plan

Recently, Tracfone launched its new unlimited plans. Starting from $20 a month, you’ll get unlimited calls and texts but NOT data. Users will only get 1GB of data. So it’s possible that you run out of your allocated balance.

When this happens, buying a Data Only Card is the only logical way to add extra data. Because adding another type of cards with texts and minutes doesn’t make sense at all.

In conclusion, when you plan to add data to Tracfone with Data Only Card, you have to consider your existing plan as well as what is it that you need (data only or with other services?). When you’ve finally decided, you can go to the Tracfone store to buy it.

Tracfone Data Only Card is also available on other retailers such as Walmart, Target, and online ones (Amazon, eBay).

If there’s anything you don’t understand, you can ask us a question in the comment! Also, don’t forget to share this article on social media.