Get the idea on how TracFone ZTE Jasper LTE Z718TL works based on the features it has to offer and how they fare in real world use so you can decide whether this mobile device will work for you or not. 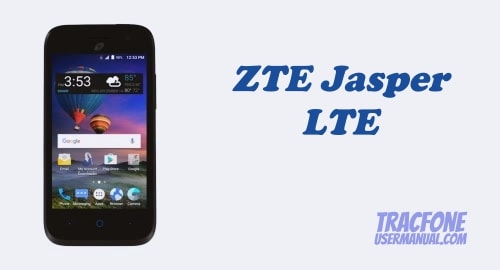 TracFone has all types of smartphone to offer and ZTE Jasper LTE Z718TL is one of them. This phone comes in not too big size (only 4 inches display), perfect for those who prefer a smaller phone. Despite the small size, this phone packed with lots of features to keep up with modern people need.

ZTE Jasper was designed with bar form factor, which has become the most used smartphone design. Measured at 5.0” x 2.54” x 0.44” and weight at 5.61 ounces, this phone is small enough compared to other modern smartphone that tends to go for bigger size. The small size makes it easier to carry around and to use single handed.

ZTE build this phone using 4 inches TFT LCD Screen. The screen size considered as a medium because most smartphone this day tend to go for bigger screen size starting at 5 inches. The resolution is only 480 x 800 pixels, which is good enough on small screen size, although it won’t hurt if it goes higher than that. But overall, the screen resolution is good and clear enough for simple daily use but do not expect such clarity for using the phone for playing high-resolution games.

The phone running on Android 6.0.1 Marshmallow, which is not the latest Android OS currently but still new enough to gives smooth operational system.

This phone has two cameras, the 5 MP rear camera, and 2 MP front camera, both provides people with a decent picture. Various camera modes, autofocus, and flash are part of the camera feature to help to improve the quality of the picture.

It also supports video capture where it can record for up to 1929 x 1080 pixels at 30fps. Good enough to record something and play it later.

To make sure everything run smoothly and efficiently, ZTE use 1.1 GHz Quad-Core Qualcomm Snapdragon 210 MSM8909 as the phone’s processor and 1 GB RAM. The RAM size is small enough, which means the user can’t have too many application on the phone, especially heavy duty app.

Still, it provides 8 GB internal storage, which is big enough to store many files. The additional MicroSD that can store up to 32 GB gives more room for the user to keep more.

This phone may lack on other area but in connectivity area, it has everything that modern smartphone has to offer. It supports 4G LTE for high-speed internet connection, Wi-Fi, Bluetooth version 4.2, USB, and also A-GPS to point out direction. It means that this phone has no problem network and device connection.

ZTE Using removable Lithium Ion 2000 mAh battery for this phone. A removable battery is a convenience factor that many people really appreciate. The battery should be able to last for up to 12 hours of talk time and 10 days of standby time, which is good enough for simple use.

Overall, ZTE Jasper LTE Z718TL is an average smartphone. It has averages screen size, average processor, average battery life and an average camera. Nothing really stands out from this phone and if you are looking for something simple and not too extravagant, then this may be the one for you.