Confused which flip phones you should buy? Read this specs comparison between LG Classic Flip and Alcatel MyFlip to find out the best device for you.

Despite advancements in smartphone technology, flip phones remain sought after. This type of handheld is older than a smartphone, yet there are still demands for them. The reason is simplicity.

Flip phones such as LG Classic Flip and Alcatel MyFlip act as a working gadget without the hassle. Some people also use them as backup phones. They are compact but reliable.

LG Classic Flip and Alcatel MyFlip are among the popular choices. Both phones support 4G networks while still being energy efficient. They typically have a long-lasting battery too. Unlike in older phones, you can also surf the internet with this device.

In this specs comparison between LG Classic Flip (L125DL) and Alcatel MyFlip (A405DL), we’ll find out more about these phones. Let’s see which is better by comparing their features.

Lastly, another key difference lies in the battery they use. LG Classic Flip offers a bigger capacity at 1,470mAh. On the other hand, Alcatel MyFlip has a lower battery capacity at 1,350mAh.

The difference is subtle. Both phones, overall,  are compact and nicely slip into a pocket. You also won’t notice the weight difference either. They are very lightweight and easy to carry.

What’s different is their appearance on the exterior. You will notice that, although they both use the same flip design, several things are different if you look closely. The most noticeable is the external screen.

While Alcatel MyFlip’s front cover is adorned with a full-color external screen, it’s not the case with other phones. LG Classic Flip only features a strip-like notification screen that’s black and white. On the back, you’ll also see that LG Classic Flip provides an emergency button, a feature that’s absent on Alcatel MyFlip.

This emergency button is an advantage of the LG Classic Flip. It can automatically dial set up numbers upon pressing. This button is useful, especially for seniors and children.

Beyond the button and the external screen, both phones share several similarities. We found out that either phone features large keypads with tactile buttons. It’s easy to operate them. However, Alcatel MyFlip features bolder and brighter keypad fonts than LG Classic Flip.

Both LG Classic Flip and Alcatel MyFlip provide a 2.8-inch QVGA display as their main screen. They also have a similar resolution at 320 x 240. It’s a color screen with decent graphic output for a feature phone.

When you compare the display of each phone, you will notice a difference. The display on Alcatel MyFlip may look larger to you. This is because the phone’s display is surrounded by a very thin bezel. As a result, it looks like the display takes up the whole portion of the front part and thus looks larger.

Quality-wise, users won’t see any significant difference. Both displays procure pretty much the same graphic quality. As feature phones, they do have flaws like harsh edges due to imperfect pixel outputs. But overall, it’s nothing to complain about.

The external screen is where the phone chooses to provide a different thing to their users. LG Classic Flip users will enjoy a 0.9-inch black-and-white notification screen. It is long and vertically narrow, displaying icons like time, battery level, and signal strength.

Meanwhile, users of Alcatel MyFlip will enjoy a bigger and full-color external display. You can even pick a wallpaper for this second screen too. Its function is no different than the second screen on the LG Classic Flip. It displays the clock, status icons, and text/call notifications.

The camera on both LG Classic Flip and Alcatel MyFlip features a 2MP single-lens camera. They come without a flash. In addition to that, a front camera is also nowhere to be found.

Yes, there’s nothing remarkable about these phones’ camera setup. Actually, it is not surprising for a basic phone. People rarely look for an excellent camera when purchasing a flip phone. Hence cameras on LG Classic Flip and Alcatel MyFlip serve as a complement rather than being the main feature.

Image results are suitable enough for daily use. LG Classic Flip is providing less noise and better detail. However, low light performance is equally bad on both phones. Since there’s no LED flash, you will depend solely on natural light.

Since there’s no front camera, it means you can’t take selfies or have a video call. There’s a workaround for selfies, though. On LG Classic Flip, you can set a timer when taking a selfie. Alcatel MyFlip also provides this timer feature.

For video recording, Alcatel MyFlip allows you to take up to 720p videos. Recording outputs are equally passable as photo results. In conclusion, LG Classic Flip and Alcatel MyFlip roughly tie in terms of camera technology.

For its internal storage, LG Classic Flip provides an 8GB of memory capacity for its users. Meanwhile, Alcatel MyFlip offers only 4GB of storage.

As you can see, LG Classic Flip is providing twice as much for storage capacity. However, the real capacity is only 4GB. The phone itself already reserved 4GB to run its system.

It’s still better than Alcatel MyFlip. This phone only left 1GB of usable space for users. In short, this specs comparison between LG Classic Flip and Alcatel MyFlip shows one ultimate winner in the storage category.

Both phones add external storage options as a solution for the limited internal storage. They both have similar allowed capacity too. With LG Classic Flip and Alcatel MyFlip, you can add up to 32GB of SD card.

SD card is not included with the purchase, so you will have to spend more money to buy it. A tip, you can use the money you save by taking advantage of various TracFone Promo Codes, Coupons, and Deals.

At their core system, both LG Classic Flip and Alcatel MyFlip use a 1.1GHz processor as their main processing brain. It’s a Quad-core processor that’s suitable for a feature phone. It also supports the latest technology such as 4G.

Comparing their performance is quite tricky. After all, as a basic phone, either LG Classic Flip or Alcatel MyFlip is limited to light tasks only. When talking about how fast they are for everyday tasks, LG Classic Flip is better. That’s due to its bigger RAM.

It’s difficult to notice the difference, though. Launching apps is mostly done in a few seconds with LG Classic Flip being slightly faster. This is especially true for apps that require internet connection such as the browser.

Since this is a basic phone, you cannot do any multitasking here. So, there’s nothing to compare in this matter either. Each phone can only do a single task at a time.

In general, both phones seem like they are reliable. If you want to call someone, they have a shortcut button that instantly opens the Phone app. There’s also a dedicated button for the camera on each phone. For non-smartphones devices, sometimes this will be enough.

There’s a noticeable difference in how the apps and menus appear. AOSP on LG Classic Flip looks like Android a lot. But for menu navigation, operating both phones is similarly easy, even if you are not familiar with a flip phone before.

Basic apps available on LG Classic Flip and Alcatel MyFlip include Calls, Messages, and utility apps like Clock and Calendar. Beyond that, this is where Alcatel MyFlip distinguished itself from the competitor. In KaiOS, an app store is available.

As a result, you can add your favorite chat app to the phone. Things aren’t limited to native apps only. The option is limited, but it’s definitely more useful than nothing.

For sensors and accessibility features, LG Classic Flip is better with its emergency button. This is sadly not available on Alcatel MyFlip. However, both phones are hearing aid compatible, so users with special needs won’t have anything to worry about.

LG Classic Flip and Alcatel MyFlip are modern feature phones with support for 4G LTE network, Wi-Fi, and Bluetooth. You’ll also be glad to find out that you can turn on Mobile Hotspot with either of these phones.

On LG Classic Flip, you can connect up to 8 devices with the tethering feature. This device also uses the latest version of Bluetooth v5. Compared to Alcatel MyFlip which uses the older Bluetooth, LG Classic Flip can cover more than 10 meters of pairing distance.

Meanwhile, GPS on both phones is a built-in one. It’s more for a mobile provider to locate the phone. It’s something accessible through apps like Google Maps. Other miscellaneous network settings include USB connection (both phones use a MicroUSB port) and FM Radio.

However, LG Classic Flip has a more demanding system, including a RAM that’s twice as big as on Alcatel MyFlip. As a result, Alcatel MyFlip is actually better in certain cases.

Which is better: LG Classic Flip or Alcatel MyFlip?

This specs comparison between LG Classic Flip and Alcatel MyFlip only leaves one thing to consider. The last deciding factor is price. Being the most recently launched, it’s not surprising to find out that LG Classic Flip is more expensive.

Its retail price is $39.99, compared to Alcatel MyFlip’s $19.99 original price tag. There are some clear advantages of LG Classic Flip that justifies its higher price, such as bigger RAM and more storage.

In the end, you can decide whether the bigger capacity is worth the extra $10. As far as basic features are concerned, both phones are a reliable everyday flip phone.

These phones are among our list of the best 10 flip phones for seniors. Read the article if you want to find out what the rest of the list consists of. 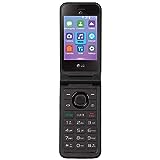